Ethiopia: Meskel Square is getting a face lift 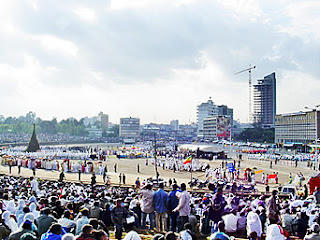 Meskel Square is set to have a radically new look according to plans made under the Beautification, Park and Cemetery Development and Administration Agency. The agency has recently made official its plan to radically change the appearance and usage of the square – backing a design that has vehicles traveling under the surface of the square leaving the ground level free for pedestrian usage. The new design was created by three Ethiopian architects who were one of the seven entrees in a competition instituted by the agency to create the best new design for Meskel square. The three winners were awarded first rank and 80,000 birr. The new design is expected to cost 500 million birr, not including fine details.
The new design was conceived under the concept that the square could be made into a place that was more valuable and functional to non-vehicle users. Currently the square is simply a crossroads for cars coming from six different directions with only some small part of the square being used for recreational and sporting activities. Even the part that is used in this way can hardly be considered a pleasant space because of the noise and smoke of passing vehicles. Under the new design people will benefit from the square with the space being available for all sorts of recreational activities. However, there will also be a space at the top of the square, available for vehicles for use on holidays and for public ceremonies. Fire accident vehicles and vehicles of VIP personnel can use the upper part of the square on these special occasions. Another concept of the design was that the space should be made useful for everyday activities and not just for special occasions.
The brief given by deputy manager and the core process owner Tegegne Tofu was that the new design should include a library, cafe and restaurants, statutes which are registered by UNESCO, designs which can express the cultures and traditions of the nations and nationalities of Ethiopia, and sport activity areas. Yonas, one of the designers, told Capital that the walls will be decorated by statutes which will promote the nations and nationalities of Ethiopia and “Ginbot 20”May 29. In addition, there will be a water feature that will follow the wall going from Bole up to Saint Joseph school. An exercise area, public bathrooms and shaded seats for those who sit in the space provided will be included.
The design integrates the new train root that is planned to pass through Meskel Square under the Growth and Transformation Plan. The train root will connect “Tore Hailoch” and “CMC” areas, and will pass through Meskel square, but will travel underground through the square in the same way as the cars.
The new Meskel square area will have two major gates which will be similar in design to the gate of the exhibition centre that is currently there. Even though the details of the design are not finalized it is known that the new design will have many seats and green areas and that the walls behind the seats will be similar with those now in place but will have decorative features such as statues incorporated into them.
According to the deputy manager and core process owner the final design details will be given to the Addis Ababa University of Ethiopian Institute of Architecture Building Construction and City Development. If the university is unable to do the job, the agency will give the job for international auction.
The designers and the agency believe that the building will be completed in three years time so long as the materials are supplied on demand.
Meskel square, that is the largest square in Ethiopia and has a long history. At the time of Emperor Haileselassie the square largely used to mark the Ethiopian Orthodox Christian holiday, Demera, celebrated on September 26. But following the fall of the Emperor on September 12, 1974 the square was renamed as Revolutionary square, commonly known as Abiot Square. The square took its current shape in 1976, its purpose has been extended since then and in 1991 it was again renamed Meskel Square.

Ethiopia’s state-owned producer, said it started building 10 new factories and is inviting private investment as part of a plan to become one of the world’s 10 biggest exporters of the crop.

The project, which has raised concern among environmental activists, involves constructing plants and establishing farms at a cost of about 80 billion birr ($4.6 billion) in four regions in the Horn of Africa country, Abay Tsehaye, director general of the Addis Ababa-based company, said in an interview on Sept. 7. The government is undertaking the work because Ethiopian private firms are “not financially and technically ready to do such huge enterprises.”

“The government has given focus to sugar development. In the coming 15 years, we hope to be one of the top 10 exporters,” Abay said. “The reason we have this target is Ethiopia has big potential in terms of climate and in terms of soil and water resources, which is very favorable for sugar production.”

Ethiopia, Africa’s biggest coffee grower, unveiled a five- year plan in December that targets annual economic growth of as much as 14.9 percent by expanding agriculture and boosting savings to fund investment. The plan aims to transfer 3.3 million hectares (8.2 million acres) of land to investors by mid-2015.

Foreign investment is being sought to develop other projects on 5 million hectares of land that has been identified for sugar production, Abay said.

“Many are coming and asking because they know the potential of Ethiopia, they know the favorability of climate, soil and availability of cheap land,” said Abay, a former national security adviser.

Sugar Corp. was established under Prime Minister Meles Zenawi’s office in November to oversee construction and run the state-owned projects, Abay said. The company is accountable to Meles so that he can give “direct, immediate decisions,” he said. The projects are in Beles in the central Amhara region; Wolkait in the northern Tigray area; Kesem in the northeastern Afar regional state; and in the South Omo Zone of the Southern Nations Nationalities and Peoples’ region, Sugar Corp. spokesman Yilma Tibebu said in e-mailed and texted responses to questions on Sept. 8.

Six factories in South Omo, along with plantations that the company says will cover 150,000 hectares, are a “development disaster in the making” for 17 ethnic groups living in the area, Peter Bosshard of International Rivers, the U.S.-based advocacy group, said in an e-mailed response to questions on Sept. 6. “Grabbing land and water for sugar plantations will spell ecological collapse and hunger for the 500,000 indigenous people” of the zone, he said.

The Kuraz Project will be irrigated by water from the Omo River discharged from the under-construction Gibe III hydropower plant, according to Abay. Local communities support the scheme and the displaced population will be “very minimal” as the farms are in “barren areas,” he said.

As many as 100 members of the Mursi, known for wearing lip plates and who number about 7,000, and Bodi ethnic groups have been jailed for opposing the plan and others are being repressed by security forces, the London-based advocacy group for tribal peoples Survival International said on Sept. 6. Large-scale farms will cover as many as 300,000 hectares in South Omo and “tens of thousands” of workers will move to the area, the group said in an e-mailed response to questions.

Without using coercion, the plan is to transform South Omo residents “socially, economically and culturally,” Abay said. Those affected will be compensated for lost earnings and given land at least equal to previous holdings, he said.

To contact the reporter on this story: William Davison in Addis Ababa via Nairobi at pmrichardson@bloomberg.net.

To contact the editor responsible for this story: Paul Richardson in Nairobi at pmrichardson@bloomberg.net.

Once upon a time in Ethiopia 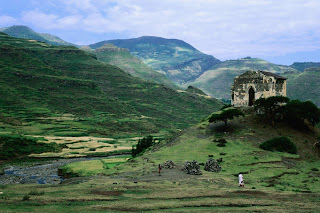 Sep 2, 2011 6:21:26 AM History and legend are so entwined in Ethiopia that it can be hard to know where one ends and another begins. No matter where you go in this land where deserts are made of gold and baboons have hearts that bleed, a plethora of Saints, Kings, spirits, monsters and wandering ascetics seem to accompany you. But there are some places in Ethiopia where the mists of myth are so deep that it can be hard not too feel as if you’re a knight in armour galloping on a white steed toward the palace of the cloven-footed Queen of Sheba.

For most of us our knowledge of Ethiopia is fairly limited, yet almost every one of us has heard of Ethiopia’s most famous daughter. She is said to have been the most beautiful and alluring woman ever to live but yet she had hairy legs and the cloven foot of the devil. Her fame has lasted three thousand years yet nobody remembers her name. She is of course the Queen of Sheba and in modern day Ethiopia she is revered as one of the founding figures of the nation as well as a symbol of the mystery of Africa’s most exotic corner.

Posted by Ethiopian Diaspora at 10:18 AM 0 comments 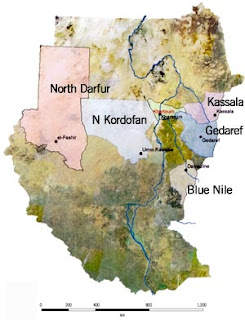 GENEVA -- The U.N. refugee agency says thousands of people are believed to be fleeing to Ethiopia to escape fighting in Sudan's Blue Nile state.

U.N. High Commissioner for Refugees Antonio Guterres appealed Saturday for an immediate end to the clashes.

His agency says it has received reports of some 16,000 people fleeing across the border since fighting erupted Thursday.

A UNHCR team was sent to western Ethiopia to assess the situation.

Sudan's president declared a state of emergency in the region on Friday and fired Blue Nile's governor after clashes broke out between armed forces and a rebel group.

Posted by Ethiopian Diaspora at 9:56 AM 0 comments 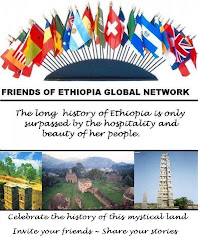